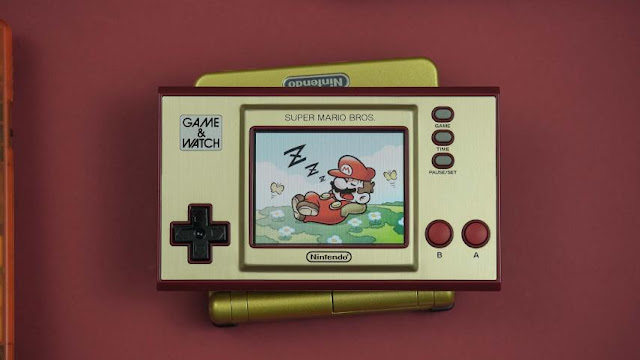 After draining the battery a couple of times, we tell you our opinion of the Super Mario Game & Watch 2020 in this analysis in which we review the games, how the experience is to the controllers and how is this hardware that is much more than just a piece of collecting.

November is a month with a lot of releases. It's been threemonthsof real heart attack and in a span of a week Xbox Series X arrives -we've already analyzed it - Xbox Series S - here's the analysis - and PS5 - we're with the review, but we've already shown you unboxing. Also just arrived the iPhone 12 Pro Max and 12 Mini, but there is another console on the pitch.

This is the Game & Watch Super Mario, a Nintendo "mini" console model that once again bets on nostalgia as the main claim, but which is really useful for reviving t985 classic and a Super Mario The Lost Levels that, in its day, did not leave Japan.

Below we tell you our opinion of the Game & Watch 2020 in an analysis in which... well, let's see what this console is capable of that you probably already have if you have the itching of nostalgia. And if not, it's possible that as soon as you finish these lines, you'll run to see if there's any left in stores. Game & Watches were "machines" that, from 1980 to 1991, sold more than 40 million units. Gunpei Yokoi, the father of the Game Boy, devised these consoles that had a single game per system, as well as alarm and clock.

59 of them were manufactured and today they are considered the subject of collecting. Throughout history, several different models were manufactured (one with two screens, some with a vertical screen, some with colour screens and with different shapes and button configurations depending on the game included), but the one Nintendo has chosen to bring the series back to life is the New Wide-Screen.

It is the 1982 console that had a crosshair (although in reality there were four separate buttons, such as those that have the Joy-Con), side buttons to perform actions and the top buttons to choose a game and put the watch. 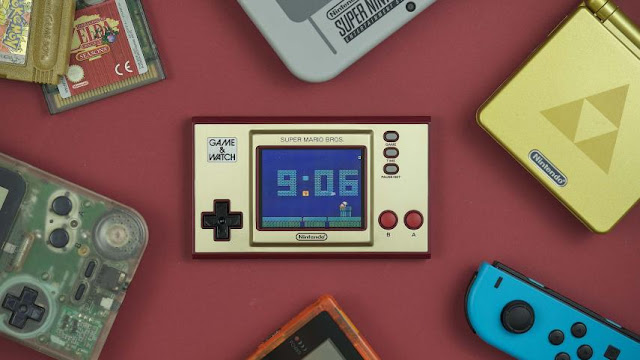 In 2020 that model returns with a classic crosshair (which reminds us a lot of the control of the NES Mini), two buttons to be able to play Super Mario (run and jump) and the three top buttons to choose the game, but the clock and make adjustments to the clock, the brightness of the screen and the volume.

These buttons are rubber and are really comfortable, but I think they can accumulate dust easily over time.

On the front, we have the Nintendo logo, the classic that we have seen on consoles like the Game Boy SP, as well as the centre screen, the Game&Watch logo and colours that based on the Famicom, the Japanese NES.

We have a gold-coloured metallic front and garnet plastic bezels, like the one on the back of the device.

On the right side, we have the power button and the USB Type-C port to charge the console. On the left is the speaker.

And little else, since there really isn't much to tell. It's a more comfortable console than it looks because it only weighs 68 grams and although the corners are pointed, it really fits the hand well and doesn't bother when it comes to playing.

It fits anywhere and is an ideal console to always carry on. However, I would have liked the screen to have a protective glass. The LCD panel is "in the air" and also looks like dust will sneak easily. My recommendation is that you protect it with the plastic sheathing that comes with the console when you are not using it. 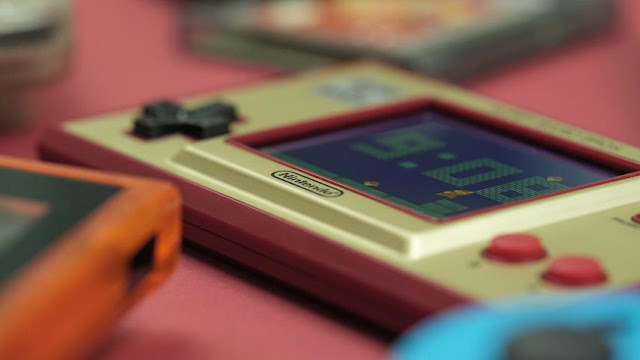 Colour display with very good sharpness and comfortable despite the size

When I first saw the images, I thought about the Game Gear Micro, that SEGA console that has a one-inch screen, smaller than an Apple Watch. However, it is much bigger and more comfortable.

It has a diagonal of 6 centimetres and is a colour LCD that faithfully reproduces the two Super Mario and Ball. There is no trace of ghosting, it has a brightness more than suitable for all situations and we can regulate this brightness easily through the settings.

It is crisp and... The truth is, there's not much more to tell about this pant. The viewing angles are correct, but obviously, it is an LCD and if we force a lot the angle will produce the typical colour change on the vertical axis.

Immediacy, suspended games and aa surprise important thing is the gaming experience. We access them through the 'Game' button, which displays a menu to access the first Super Mario, the second and Ball.

The first Super Mario needs no explanation, but Super Mario 2, or The Lost Levels, yes. It is a Super Mario with steroids, a really difficult game that in its day did not leave Japan and that really has a devilish difficulty. It's going to be many hours before you master this title. 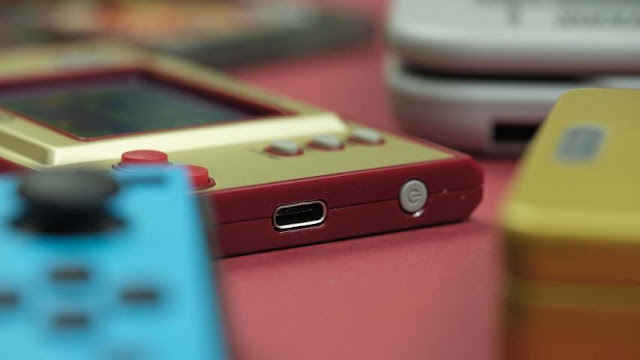 It ends up 'itching' and the truth is that it's a lot, a lot of fun, but the surprise has been Ball. Published in 1982, it is a game in which we control the hands of a juggler who must not allow the balls to fall to the ground.

They are three positions per hand and are controlled very easily with both the crosshairs and buttons and... well, it's a very, very simple game that shows that a good idea from 40 years ago is still a very good idea.

On the other hand, we can enter and exit the games, as well as turn off the console, and that when you return to the game it is at the same point where we leave it thanks to a kind of "autosave" that allows you to leave the console on sleep without turning it off completely thanks to the features of the flash memory.

In addition to these three games, which is really a scarce content for the 50 euros that the machine costs, we have the clock function. It has 35 different modes, but it is not really very useful because after a few minutes the screen is turned off and the console goes into sleep. We can play by pressing buttons (one press, hold) to change backgrounds and that more or fewer elements appear.

It's a showy thing, but in the end, it's not worth much of the clock function, we can't leave the console in a corner as a decorative element waiting for the watch to stay until the battery goes out.

And no, unlike the original models, this new Game and Watch has no alarm. 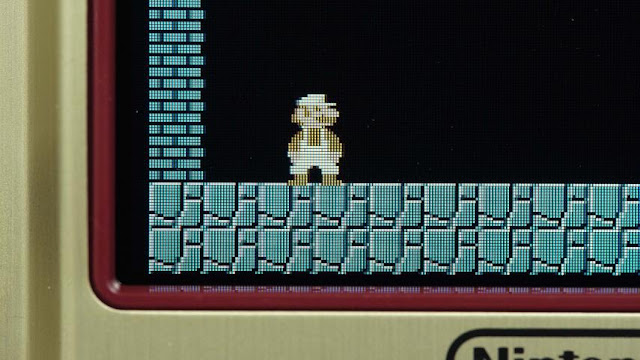 About seven hours of autonomy with a sound that meets

The sound produced by the Game & Watch 2020 is exactly what we expect from a Mario game. The effects are correct and have a considerable volume taking into account the size of the speaker.

It makes sense because there's also not too wide a range of sounds and effects, but we don't miss more volume.

Regarding autonomy, I've managed to download it a couple of times and autonomy depends on what we're doing. Playing has lasted me about seven hours (seven hours playing Mario to drain the battery is hard, I tell you) and with the clock set about eight and a half.

In the end, the screen is the most consuming element and if we want the clock function, we must be pressing the power button periodically because the console goes into sleep when we are not interacting for a while.

It is charged using the USB Type-A to USB Type-C included in the box, and the battery has 200 mAh supporting an input power of 5 V. 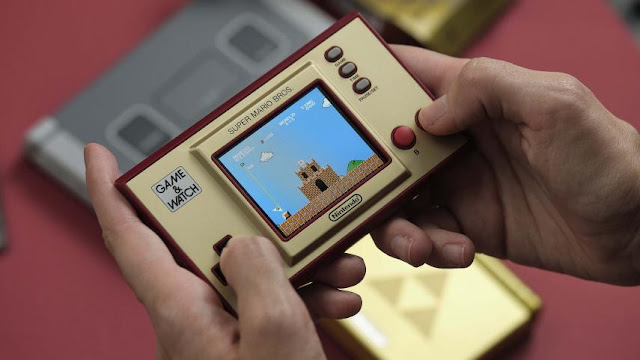 You do it with a Raspberry, yes, but it doesn't look a lot like it.

The Game and Watch 2020 is expensive, very expensive considering that Ball is a classic and basic LCD game and that the other two Super Marios have played them dozens of times on virtually every Nintendo console (and they are on Switch within the Nintendo Online subscription), but it is not the same.

Having the console on our hands makes the experience completely change and although it costs at first because the buttons are harder than the ones we have on all the consoles of recent years, the truth is that it gives you the like to play on this hardware.

It is expensive, games are missing and many may play the first day and park it forever, but as a collecting object, it is beautiful and, also, that the included games are timeless and infinite give meaning to the experience.