Ray ban stories wayfarer smart glasses review Ray-Ban Stories is the result of the collaboration between Facebook and Ray-Ban. 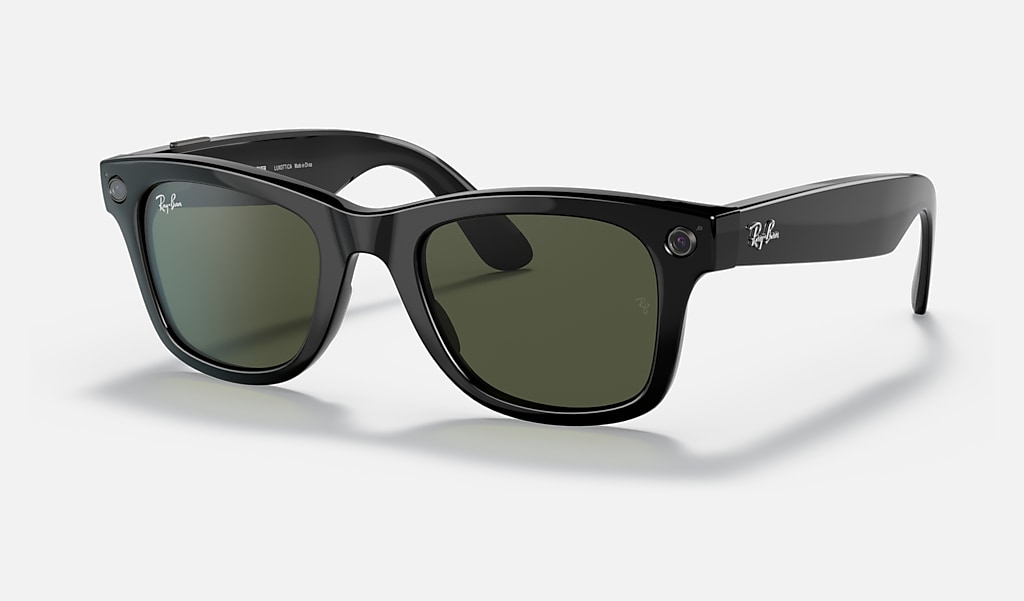 Ray-Ban Stories is the result of the collaboration between Facebook and Ray-Ban with which both companies delve into wearable technology using one of the most popular models of sunglasses of the brand of Italian American origin.

In the Ray-Ban Stories, we will not find the latest metaverse-oriented augmented reality technology that Meta has on its roadmap. Its proposal is much more practical and closer: allows you to take photos and videos, enjoy your music or take calls without taking your mobile out of your pocket.

Meta has partnered with Ray-Ban to create the Ray-Ban Stories to load the classic Wayfarer, Round, and Meteor models of the glasses firm with technology and, in the process, explore new ways of expanding their applications.

When you read that a big tech company presents new smart glasses, you can't avoid the image of futuristic-looking glasses with ultralight materials of the latest generation. In short, something that no one would wear to leave the terrace or go for a walk on a sunny day.

Forget all that. To begin with, the concept of these glasses is not based on offering only a frame loaded with technology as Google Glass did or an augmented reality monocle such as Oppo Air Glass.

Meta (formerly known as Facebook) has opted for a much smarter solution by betting on sunglasses instead of a simple frame and leaving the design of its glasses to Ray-Ban experts who have been manufacturing sunglasses for almost a century and incorporating their technology into that frame.

The result is sunglasses that go totally unnoticed until you tell whoever you have in front of you that you have two cameras on the frame of your glasses. Only at that moment do they realize that what they have had in front of them for a long time is not conventional sunglasses.

Ray-Ban has not taken a risk with this product by betting on the Wayfarer frame, a classic presented in 1953 that has become the best-selling sunglasses in history. Ray-Ban Stories are also available with two other classic Mounts Ray-Ban Stories Round and Ray-Ban Stories Meteor.

The design of the different variants remains faithful to conventional models, except for some modifications necessary to integrate the hardware. The most obvious are the two cameras at the upper ends of the front, some sideburns somewhat wider than those of the original model, and a weight of 50 grams.

The Ray-Ban Stories Wayfarer is available in 10 finishes in which frames of different finishes and colors are combined with types of polarized glass of different shades, photochromic crystals that darken or lighten depending on the light, or of course, the option of adding graduated crystals.

When you examine the glasses more carefully you begin to discover details such as a white LED located next to the right camera that lights up to indicate to who you have in front of you that the camera is working.

Above the right pin is the shutter button that activates both video recording and photo capture. This location and its size have presented us with some problems with involuntary pulsations when removing or putting on the glasses, activating the recording of videos, or taking photos.

The outer part of that same pin is actually a touch surface that serves as a control for music, changing songs, or adjusting the volume of the audio played from discreet micro speakers located near the ears on the bottom edge of each pin.

Integrated into the hinge of the left pin we find the power switch, and in the same area on the right side, the status LED allows you, looking sideways, to see if you are recording, if they have been turned on or if they are pairing with the smartphone.

The front cameras are not especially small or discreet like those we could find in laptops or mobiles and replace the decorative rivet of the original model. Perhaps, that hiding them in plain sight works. For everything else, they are conventional Ray-Bans that do not attract special attention.

Next to the Ray-Ban Stories is included a transport cover somewhat bulkier than usual. The reason is that this case, in addition to protecting the glasses when you do not use them, allows you to charge your battery. The case is charged via a USB C cable included in the box.

The Ray-Ban Stories have endured about four hours of use on average, depending on whether you use the cameras more or only play audio and taking into account that if you use them in the city you will have to raise the volume.

The Ray-Ban and Meta glasses need 1 hour to recover the charge in their case and it provides about three additional charges. The full charge of the case has taken 3 hours. 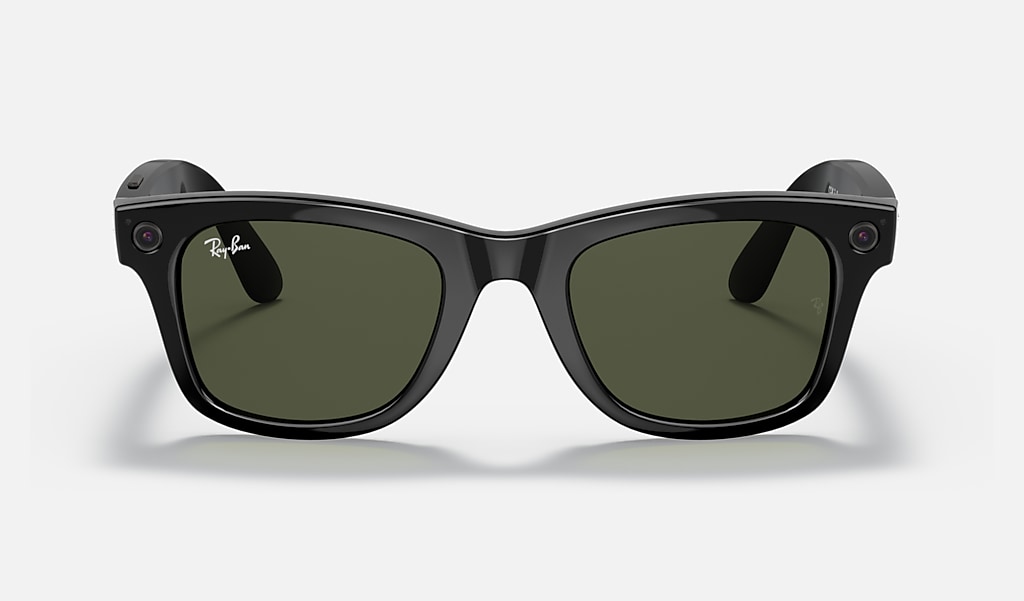 One of the main functions of the Ray-Ban Stories is to take photos and videos from the two 5 Mpx cameras integrated into the mount with the immediacy of not having to take your phone out of your pocket, and open the camera app and take the photo.

Simply press the pin button once for the glasses to start recording or hold a long press to take a photo and the glasses will emit a warning sound and a white LED will light up next to one of the cameras.

Another issue is the quality of the resulting photos and videos. The cameras deliver photos with a resolution of 2,592 x 1,944 pixels and the composition of the photos will depend largely on the expertise of the user.

Neither Meta nor Facebook have given too much information about these cameras, but in reality, the entire weight of photo and video capture falls on the right camera. We assume that the left camera is used in the collection of light and depth information because when covering it there is no visible change in the image.

It is not easy to get a well-leveled photo when you do not have a visual reference of the result and you have to trust that your head is aligned with the photo. In addition, it is important to be very still during the capture to get a photo without trepidation.

In general, the stabilization system does its job well and by keeping the focus to infinity it makes everything in focus, although that is why it loses that cinematic effect that brings the blur of the background or the planes in front of the object.

In terms of quality, we get photos equivalent to those of a low-mid-range smartphone. The colors are well treated, although HDR presents some problems in certain complicated light situations, as usually happens in entry-gamut mobiles.

Something similar is found in the video section. The colors are vivid without oversaturating them and apply an efficient digital stabilization that makes the image more fluid, but that is noticeable in the final resolution of the video since you will need to apply a more or less aggressive digital crop.

It is an image processing very oriented to social networks, especially Instagram or Facebook for the resulting image format. Low-light performance drops and noise makes its appearance. Probably because it has a sensor that is too small and too high an aperture, responsible for the whole scene being in equal focus.

In short, the Ray-Ban Stories respond to the immediacy of having a camera always ready to capture what is happening, but we can not expect results of the same quality that we would get with the camera of the mobile.

Sound is one of the most surprising sections of Ray-Ban Stories. When I told my friends and relatives that what I was wearing was not conventional glasses, the first thing they did was squint and get closer to look better at the cameras on the front.

However, when they were tried on and, without warning, began to play music from Spotify, their eyes opened like dishes to the surprise of feeling how the music wraps your ears with a more than correct quality to be glasses.

Obviously, we cannot compare the open sound that is projected from the micro speakers integrated into the pin with that of in-ear headphones in which the sound is inserted directly into the ear canal.

Being a more open sound, the bass does not have as much presence and the frequency range is somewhat smaller. Ambient noise plays very much against this open sound since, in somewhat noisy environments, such as the street traffic of a large city, it will force you to use them at maximum volume.

Ray-Ban Stories allow you to answer calls without taking your phone out of your pocket. Simply touch the touch area of the right pin to pick up or hang up the call and the three built-in microphones are responsible for capturing the voice.

In this case, the same thing happens as with music: in more or less silent environments the audio quality of the call is good at both ends, but in noisier environments or with the wind the thing is complicated, and not so good quality is achieved. 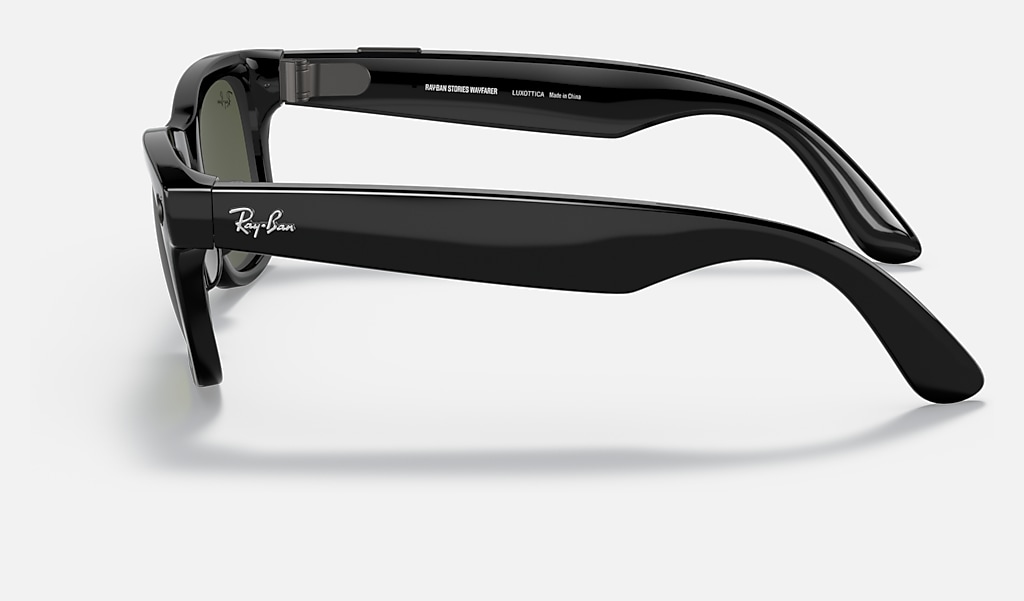 All operations, controls, and permissions related to Ray-Ban Stories are concentrated in the Facebook View app that must be installed on an Android smartphone or iPhone and logged in with a Facebook user account.

The mobile must remain synchronized with the glasses and within the Bluetooth, coverage to transmit the audio or send the photos and videos from the 4 GB of internal memory of the glasses to the app.

By tapping on the icon of the user account, you access the settings of the Ray-Ban Stories from where you adjust the privacy options, the operation of the glasses, and the activation of the Facebook assistant to use voice controls with the glasses.

At the moment, this assistant is quite limited and does not accept more than some commands in English that allow you to take photos with the command "Hey Facebook, take a photo", make videos, control the playback of music and volume, missing the opportunity to open up to other assistants with greater development.

Facebook View acts as a funnel for all the content that is generated from the glasses, limiting their potential for other apps to use beyond playing Spotify music like conventional Bluetooth headphones. Honestly, we would have liked to be able to broadcast live on Instagram or Facebook, but it is not possible due to hardware and privacy limitations.