Theoretically, the Tracking Performance of the Mojo Lens should be as effective as officially claimed, as nothing is more accurate than phys. 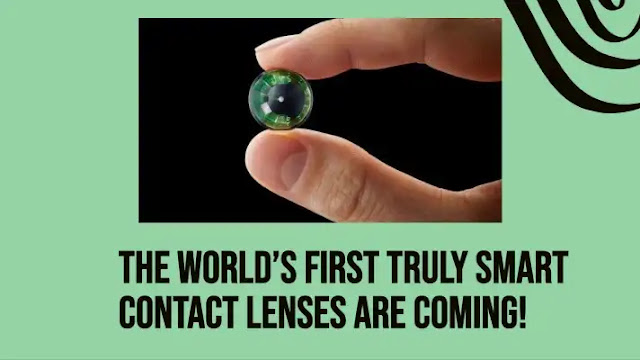 AR contact lens manufacturer Mojo Vision released a prototype of the new Mojo Lens at the end of March, saying it is "the world's first truly smart contact lens". The company notes that the device incorporates a range of industry-first features, including the world's smallest and densest dynamic display, low-latency communication capabilities, and an eye-activated user interface.

At AWE 2022, RoadtoVR's Ben Lang picked up on Mojo Lens and shared his experience. The following is the specific collation of Yingwei Network:

It wasn't until last week that I had the opportunity to experience Mojo Vision's latest smart contact lenses first-hand. I'll admit that I thought the team would take years to develop, but when I got started, I saw a prototype that was more powerful than expected.

When I entered the demo area at AWE 2022, I thought it was a technical model to show their goal of eventually shrinking and fitting into the lenses. However, the company says it's a functional prototype, with everything inside the contact lenses being real runnable hardware.

Mojo Vision noted that the latest prototype includes the "world's smallest" Micro LED display module with a size of just 0.48mm and only 1.8 microns between pixels. In addition, it incorporates an ARM processor, a 5GHz radio, an IMU (accelerometer, gyroscope, and magnetometer), a "medical-grade miniature battery," and power management circuitry with wireless charging components. 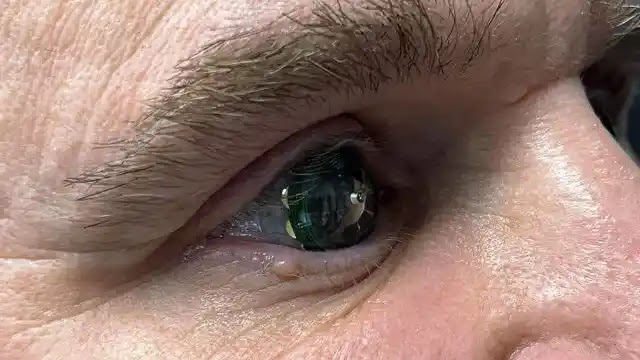 Although the smart contact lenses are still thicker than regular products, the device demonstrated last week can be applied to the human eye, as shown in the image at the top of the article.

Of course, it looks rather creepy, but the team notes that further efforts will be made to thin the device and cover the electronics with cosmetic irises to make future products look more natural.

The presenter above is Drew Perkins, CEO of Mojo, which I failed to wear in person at the convention. Instead, I needed to experience it with a custom stick.

As shown in the image above, I want to hold up the custom stick with the Mojo Lens hanging in front of me to feel the display and performance of the device in this way.

To my surprise, I saw more than just a few pixels, but a complete graphical user interface with readable text and interface elements. Although it's only a single green right now (the human eye is more able to distinguish green than other colors), this demonstration makes it clear that Mojo Vision's ambitions are more than just a pipe dream.

Although the physical display located in the center of the lens is not transparent, you can't see it because it's too small and too close. However, you can see the image it projects.

Compared to every head-mounted display on the market today, Mojo Vision's smart contact lenses are particularly interesting because they can move with the eyes. This means that although the field of view of the display itself is only a very small 15 degrees when you look around, it moves with your gaze. In other words, no matter where you look, you'll be able to see a sharp picture in the center of the field of view, because it's always within the gaze range of the fovea. Essentially, this is like a device with "built-in" fixation rendering. Of course, the limited field of view remains a bottleneck for many use cases, but the ability of the display to move with the eyes alleviates this problem at least to some extent.

But what about input? Mojo Vision has been studying how users will interact with the device. Since I couldn't wear the contact lenses, the team simulated the effects of the device with a VR headset that supported eye tracking. Inside the VR headset, I see much the same interface as I see through the Mojo Lens, but now I can interact through my eyes. 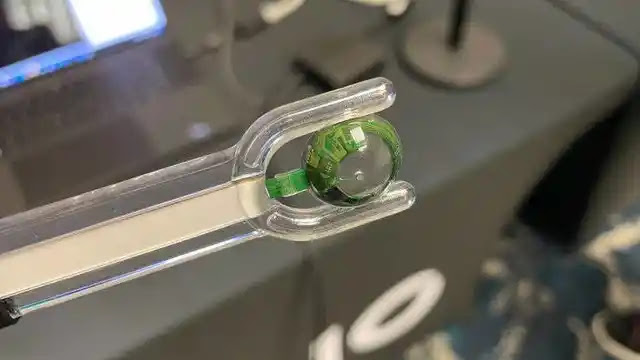 The current implementation does not limit the entire interface to a smaller field of view similar to mojo Lens. Instead, your line of sight is like a "spotlight": when the eyes move around, the system displays a larger interface. By hovering your gaze over the button, you can interact with the interface, such as showing the current weather or a recent text message.

This is a fun bare-handed interface interaction method. Of course, in my experience, the eye itself is not a very good active conscious input, as most of our eye movements are subconsciously controlled. However, after enough practice, artificially controlling the line of sight input may become as simple and seamless as controlling the touch screen with your finger. For Mojo Lens, another, better form of input may eventually emerge, but that remains to be seen.

Eye interaction relies entirely on high-quality eye tracking, and since I wasn't able to wear it myself, I couldn't be sure if Mojo Vision's eye-tracking would be up to the task. However, the company claims that its eye-tracking is "an order of magnitude more accurate than today's leading (XR) optical eye-tracking systems."

Theoretically, the Tracking Performance of the Mojo Lens should be as effective as officially claimed, as nothing is more accurate than physical attachment. The IMU of this device may be as prone to drift issues as any other IMU. Another question worth observing is how to infer and separate the movement of the user's head from the sensor data of the device attached to the eye.

If the actual eye tracking is as accurate as officially claimed, it would be a major victory, as it could help the Mojo Lens become a true AR contact lens, not just a smart device for displaying basic text information.

It is increasingly common to find in certain mobiles the characteristic that they are resistant to water and/or dust, under different levels of …

The best and most curious appliances of Cecotec, the Spanish brand that sweeps Amazon